The business operated out of the former building of St. John's Lutheran Church at 555 Market St W after the church relocated to its current location at 336 Market St W. When the property was converted into a cheese factory, Milk Storage was in the still-existing former church while a separate no-longer-existing building was erected in which the cheese was produced[3]. It is unclear how long the cheese factory operated, but the building was for some time a duplex and is now a single-family home. 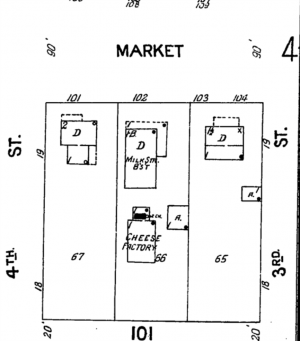 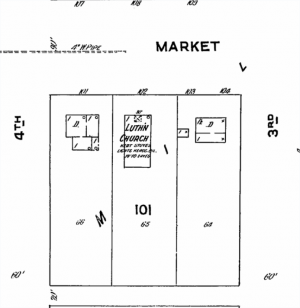 Excerpt from a 1911 fire insurance map showing the church. As can be seen in relation to the 1923 image, the steeple was removed at some point following its deconsecration.

The building was originally built by the congregation of St. John's Lutheran Church in 1854, who had outgrown their log cabin and frame churches they had occupied previously. The original structure was approximately 36 by 26 feet, with a belfry containing a bell donated by Mrs. Anna Long Simmons[4]. What is now a front porch was once part of the inside of the one-room church. Remnants show that there were once three large arched windows and/or doors on the side facing Market St.

At some point, most likely in the late 19th century, the building was expanded to almost double the size via an expansion to the South side. When the congregation moved in 1912 the bell was removed from the belfry and installed at the current church, where it continues to be to this day.

A tin ceiling was installed throughout the one-room structure as part of its conversion into a cheese factory. Since then the building was partitioned to convert it into two stories with rooms you would see in a conventional home.

Work done on the building in the 2020's show that the framing used when installing the ceiling was sourced from Finefrock Furniture Store's lumber company.

Fred Dahler immigrated from Seftigen, Switzerland in 1905 to work at Jacob Berger's cheese factory in North Canton. At some point between 1913 and 1924 he bought out the North Canton factory while continuing to run the factory in Canal Fulton. In 1924 Fred traveled home to Switzerland to visit his father and conduct some business[5].