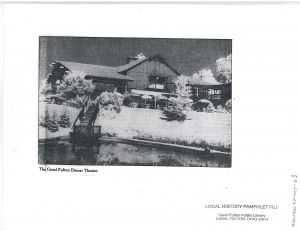 Undated image of the Canal Fulton Theatre during its time as the Dinner Theatre.

The Canal Fulton Summer Theatre was established in 1953 within an old barn situated near Clay's Park. Two years later the company purchased their own 100-year-old barn at 9460 Portage Rd. The theater company was also referred to as the Canal Fulton Summer Arena and starting in 1975 it was converted into the Canal Fulton Dinner Playhouse after several rounds of additions and renovations. They produced a new play each week every summer for quite some time. Producers who were active in the theater include David Fulford, Elisabeth Bliler, and William Dempsey. After thirty years of business the theater company shut down in 1983.