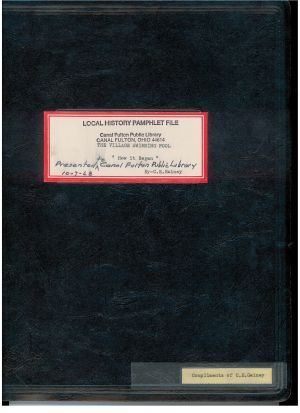 Cover of "The Village Swimming Pool and How it Began".

"The Village Swimming Pool and How it Began" is a historical record and compilation of photos taken during the 1930s while construction of the swimming pool in St Helena Park was in progress. The record was donated to the Canal Fulton Public Library in 1968 by the writer, C.E. Gainey.

“THE VILLAGE SWIMMING POOL”
*And How It Began

The following story relates to the origin of the Village Swimming Pool:-

Fear of the loss of the origin and construction history of the Village Swimming Pool causes the writer, who was instrumental in its planning and construction, to attempt to relate some of the Pool’s background for historical purposes.

Back in 1933-1934, times were tough and many men were out of work, our country’s economy at a low ebb. The Government, realizing the unrest and seriousness of world conditions, enacted the E.R.A., a federal program whereby Federal Funds could be spend on worth-while projects, and as a direct result of this program, millions of the nation’s idle men would be put to work to earn a meager day’s wages whereby he could support himself and his family.

Throughout the Nation, Political Sub-divisions were requested to make known to their County Authorities (in this case the Stark County Commissioners) worth while projects that would reflect a general benefit to its community, and the employment of a Multitude of un-employed men.

Requests for projects were submitted to the Stark County Commissioners, and they in turn would submit them to the Stark County Engineer’s Office for review to determine their eligibility, acceptance or rejection as a project worthy of general benefit to the community.

The writer, who was a Deputy in the Stark County Engineer’s Office was very close to this program, and fully convinced that any worth-while project submitted by the Village of Canal Fulton would receive its due consideration.

Mr. John Dugan was Mayor of the Village at this time, and the writer the Village Clerk. Upon receipt of a formal request from the Stark County Commissioner’s Office asking the Village Council to prepare and submit proposed projects for this program, the Village Council appointed the Mayor, Mr. Dugan and C.E.Gainey, Clerk to act in behalf of the Village, and to submit for approval such projects as they deemed beneficial to the community, and that would warrant with-out question the expenditure of Federal Funds under the Governments E.R.A. Program.

Much thought, and the burning of midnight oil was given by Mr. Dugan and the writer in searching out acceptable projects that would not exceed the amount of money allotted to the village under this program.

Among the several projects proposed, Mr. Dugan the Mayor, suggested we construct a dam in the Ohio-Erie Canal within the Village to provide a place for swimming for the people of Canal Fulton. This proposal did not meet the approval of the Village Council, as the canal was at low ebb and pretty much of a mosquito hole and swampy, due to a break in the banks of the Nimishila Feeder, from which water was fed into the canal.

In the course of our search for a more desirable location for a swimming pool, which we thought would be an asset to the Village wherby the people of Canal Fulton could enjoy themselves, Mr. Dugan the Mayor and a good citizen of our village, became ill and died from his ailment, leaving the responsibility to the writer to carry on in this matter.

In the early part of the spring of 1934, the writer who was home from work recuperating from an attack of the flu, was standing at the front window of the Ray Myers Ford Garage soaking in some of the early spring sunshine and looking down across the canal and river. Knowing that the land lying between the canal and river was village property, and had been laid out an a Market Place when the village was first laid out, it being public property prompted the writer to remark in the presence of Mr. Myers, that this location would make an ideal place for the Village Swimming Pool.

My suggestion did not meet with the full approval of Mr. Ray Myers, this did not cause me to dismiss my thoughts of its possibility, as I was determined to investigate its possibility, in a few days, after fully recovered from the flu, and with the aid of my son Keith, we ran levels from the Canal to the River to determine the fall in elevation between the two bodies of water.

The writer and the Village Council were fully aware of the fact that high flooding of the Tuscarawas River would overflow in to the pool if constructed in this location. Every-one conceded that this was of a minor nature and would happen only once in a long time, and the land being Village property there would be no land cost.

Upon completion of the survey, I, found to my surprise that a pool 8 feet deep at its outlet end could be constructed with gravity flow of water from the Canal into the Pool, thence from the pool to the River, along filter beds at the inlet end of the canal which would supply the water for the pool.

This location met the approval of the Village Council, who directed the writer to prepare a preliminary drawing of the proposed location along with elevations. This was done and presented to the County Commissioners, who in turn presented our application to the Stark County Engineer’s Office, Mr. Wade Schidler, County Engineer, and who’s office was charged with checking, prosecution and supervision of all projects.

Within a few days the County Engineer dispatched a survey crew to the scene and made a thorough survey from which final construction plans were made for the construction of the Swimming Pool at Canal Fulton, O.

This project, due to its nature, had to be approved by the Stark County Health Dept. and also the State Health Dept. in Columbus, O. The writer being a good friend of the Stark County Health Officer which was Doctor Floyd Stamp, had no trouble in having him approve the project. The next hurdle to cover was the State Health Dept. in Columbus, O. At Dr. Stamp’s suggestion, he and I drove to Columbus and with his fine manner of persuasion, he convinced the Columbus people that this was a fine improvement for the people of Canal Fulton. So, home we came with the blessings of the Health Dept. of the State of Ohio.

Construction of the Swimming Pool began on June 4, 1934. The concrete footers, walls, inlet and outlet to and from the pool were completed in November of 1935. Mr. Orton Mathie was the project foreman on all of the above work.

The construction of the pool did not include the 6 foot brick walk around the pool. This was accomplished by members of the Canal Fulton Rotary Club along with other public spirited citizens of the village. Around 1935, Route # 21, was being repaved and the section just below Lock #4, was being abandoned in favor of about one mile of relocation of the road. On this section of the old road which was abandoned, the existing brick pavement was still in tact, but was to be removed at a later date by the contractor, Mr. Elmer Vogt of Massillon, O. Thru the efforts of Carl McFarland, a hard working and devout Rotarian and the writer, we imposed upon and was given Mr. Vogt’s permission to remove from the old abandoned road bed enough brick to make a 6 foot walk all around the pool for sanitary purposes. The task of removing the brick from the road bed, the trucking of them to the pool, cleaning and laying the brick on a prepared sand cushion and finally cement grouting of the brick in place was finally completed thru the find co-operation of the Rotary Club members and the many fine citizens who were possessed with that community spirit of making Canal Fulton a better place to live in.

Many other minor and major improvements were made to the pool from year to year. The writer for a good many years would make his visit to the pool twice a week (at about 6 A.M.) to treat the water and remove the debris and leaves from outlet overflow.

The Village Council always provided the necessary chemicals for the treatment of the water as well as the funds for many minor items necessary to keep the pool in good graces with the Health Department.

Then in later years the Rotary Club along with the co-operation of the Park Board assumed all responsibilities of managing the pool and maintenance of the Village Park. Even at this early date, no place in Stark County could boast of having a Park and Pool like the one in Canal Fulton, and this is definitely due to the public spirited people of the Village of Canal Fulton.

Many other fine improvements have been made to the Pool since 1940, the most outstanding one being the erection of a Bath House, Water filtering system and the enclosing of the pool with a Page wire fence which was installed in 1967.

This report on the Canal Fulton Swimming Pool is from the memory and meager records of the writer who was very much concerned in Village Improvements.